Know About The Concrete Column Formwork 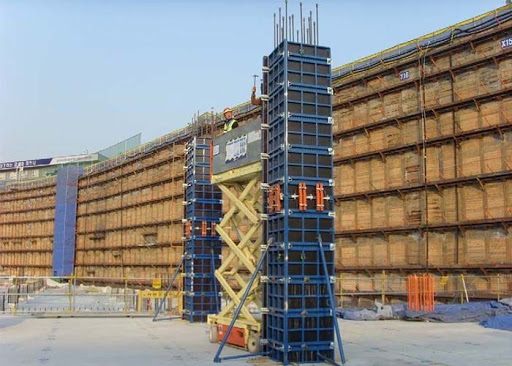 Formwork, commonly known as Shuttering, is a term used in the construction of Concrete, representing a basic mould or structure in which fresh concrete is poured in to subsequently harden with time.  Formwork can also be named for the type of structural shape they take depending on the construction material that is to be obtained

Formwork, commonly known as Shuttering, is a term used in the construction of Concrete, representing a basic mould or structure in which fresh concrete is poured in to subsequently harden with time.

Formwork can also be named for the type of structural shape they take depending on the construction material that is to be obtained by the process. When used for the formation of columns, they are called concrete column formwork, similarly, when used to form slabs or beams they are called slab and beam Formwork respectively.

They are temporary structures and thus designed to suit the economical expenditure. The process of removing a Formwork is termed as Stripping and sometimes, the removed Formwork can be reused; in which case it is called a Panel Form and that which cannot be reused is called the Stationary Forms.

The best and most useful feature of Formwork lies in its capability of being used over and over many times, without having to undergo many maintenance checks. Some of the things to keep in mind when choosing the right Formwork material are:

Hacking away at the wooden pieces should be kept to a bare minimum in order to reuse the material again.

The plan of the building should involve very fewer variations to be made to the rooms and the area, making the reuse of the formwork possible.

Designs should be innovative allowing the use of slender sections in an economical way.

Additionally Formwork can be made formidable and stronger by a combination of different materials. Steel, fiberglass, timber, precast concrete and plywood either alone or in combination can be used for specific purposes.

Formwork’s once made should be strong and durable enough to carry many loads. They have to meet certain criteria to be pronounced as usable and here are some of them:

The material used in the construction of the Formwork should be lightweight, easily available and once stripped should not warp when exposed to the elements

When stripping, there should be no damage to the concrete

Types of Formwork in Concrete Construction

This type of formwork is used to create concrete column formwork, slab formwork, beams and posts along with joints and ledges. They need to be lightweight, well seasoned, free from any knots and easily workable when using any nails.

Plywood sheets, when bonded with resin and attached to timber frames, make a sturdy panel for use. Their reusable count also increases comparatively with that of timber formwork.

Used substantially in larger projects, Steel formwork consists of a number of thin steel plates welded together and stiffened along their edges by using small steel angles. These formworks have an increased advantage over timber formwork which are mostly used in smaller projects.

It is essential to keep in mind that the stripping of formwork requires an experienced hand and should fulfill the required conditions in order to avoid any unneeded damage to the concrete or the formwork. They should be eased carefully to avoid the sudden displacement of any load onto the concrete, resulting in unwanted impairment to the completion of the project.